We started Loki because we believed we had ideas that could improve the range of tools people use in their pursuit of privacy and safety online. Thankfully, it appears thousands of people see the potential in our ideas, and dozens of firms, funds and individuals have supported our project to date. With this support, I believe we can create a protocol that will help people across the globe keep their data safe. We have always intended to be as transparent and open as possible, and we wish to share the details of our set up and activities so far with the community. We will continue to publish updates when legal and commercial considerations permit.

This document was prepared to outline the funding scheme that underpins the development of the Loki project. It is to act as reviewable evidence to those auditing the project’s origins, and to provide maximum transparency to members of the cryptocurrency community seeking to understand how Loki has been distributed.

Loki as a concept was created in late 2017 by a group of Australian cryptocurrency enthusiasts. What started as a part-time passion between friends quickly evolved into something bigger, and at the beginning of 2018, the project attracted seed funding and subsequently, a talent pool.

While decentralisation is a key component of what makes cryptocurrency a useful technology, successful decentralised teams rarely form organically, and the need for extensive funding to carry this project out at a desirable speed and scale necessitated a presale and premine.

With legal advice and assistance from multiple advisors, we found a suitable structure for the project and through it, sold out of premined Loki in a presale.

I wish to stress that while the launch, private sale, and all major works so far have been carried out by our team, Loki is an open source project and will remain so. We make no claim to the ownership of the Loki concept, brand, or technology. We consider our work to be authorship only.

In order to attract funding to the project, it was necessary to create a separate legal entity to ensure that the individuals and teams working on this project were protected.

This entity is an Australian public company limited by guarantee, called LAG Foundation Ltd. The company is structured so that it meets the requirements of a registered charity in Australia. The members and directors of this company do not hold shares, and no benefits or profits are distributed to its members. For reference, the constitution is based on the default constitution supplied by the ACNC, and can be read in full here.

LAG Foundation Ltd is operated under the following constitutional objectives:

(a) facilitating the development of an open source, highly secure, decentralised data transmission network that allows individuals, business and government to freely transact and communicate without the threat of malicious third party interference;

(b) ensuring the continuing development of the secure network by funding independent development projects;

(d) ensuring the open source network is developed as a genuinely decentralised system, absent of any external control or influence to ensure the independence, security and longevity of the network;

(e) raising moneys to fund the activities and charitable objectives of the Foundation, including through the offering of the Loki cryptocurrency; and

(f) all other such activities as are ancillary or incidental to the above purposes.

A number of other resolutions have been passed in relation to the premine and it’s permitted use.

Over 7 million Loki is held in escrow for the Founder, Advisor, and Seed allocations. The Founder and Advisor allocations follow a 12 month lockup schedule, where 25% of each allocation is released every 90 days following mainnet launch. The allocations to Founders and Advisors are remuneration for services rendered to the LAG Foundation Ltd.

The Seed allocation follows a similar schedule, with a 30% initial release and 20% every 90 days until the final release of 10%.

The TX IDs are as follows:

A private sale was conducted on the 59% of the Loki in the Token Generation Event (TGE). Over 50 separate entities took part, with our target of USD$9.027M reached. The first private sale agreement was signed on the 8th of March, 2018 and the sale was closed 18 days later on the 26th of March. Minimum contributions for allocations were $100k USD.

The mean transaction size was $173k USD, with the majority of transactions being a USD$100K allocation.

Contributions came from all corners of the globe. This chart displays the distribution of Loki across the contributor’s nation of residence. 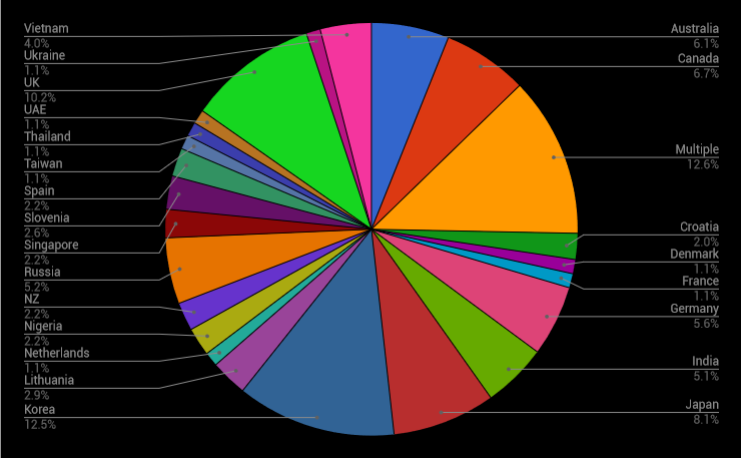 Each participant in the sale privately negotiated an allocation with the directors of LAG Foundation Ltd and their authorised agents.

Each sale took place by means of an agreement between LAG Foundation Ltd and each participating entity. The agreement was executed by payment of the participant’s preferred currency. The most popular currency was Ethereum by far. However, over the course of the private sale, the value of Ethereum declined significantly in value.

To meet USD$100K allocations, earlier sales required only around 115 Ether to complete an agreement. At its lowest point, sales in Ether required 259 Ether per sale in order to complete. Shortly after sales were completed, the value of Ethereum began to climb once more.

At the time of report writing, the net value of the Private Sale contributions exceeds the $9.027m USD raise target.

It is of the intention of the directors of LAG Foundation Ltd to use the funds from the sale to pursue the objectives laid out in the company’s constitution. In order to ensure that these funds guarantee at least 3 years of large-scale development funding, it is necessary to liquidate the vast majority of the Ether raised into fiat currency in order to manage exposure to the volatility of the cryptocurrency market.

The directors of LAG Foundation Ltd believe cryptocurrency to be a useful tool and asset which will become a commonplace means of transaction and a stable and secure store of value in the future. Sadly, the current volatility in the perceived value of cryptocurrencies leave holding assets primarily in cryptocurrency to be a dangerous strategy for the LAG Foundation Ltd, in the interests of ensuring that the Loki project can be securely funded for the next 3 years.

As such, the treasury of LAG Foundation Ltd will be comprised mostly of fiat currency until a suitable treasury management strategy can be devised.

No further major sales of Loki coins are likely to take place. This begs the question, where will the Loki project receive its long-term funding from?

The Founders of this project intended to create a self-funding system so that users can be certain that no external influences drive the development funding of the Loki network in an undesirable direction. The Loki mainnet includes a 5% block reward that is issued to a wallet that LAG Foundation Ltd controls for this purpose.

The Loki Foundation will continue to be funded in the long-term by this block reward. In the future, the community may decide that this reward is unnecessary or of too high or too low a proportion, in which case, a hard fork event may change the nature of this block reward split.

This section will describe the process by which any third party can review and audit the wallets controlled by the Loki Foundation on the Loki blockchain to validate that the resolutions have been correctly followed. Auditors will need to have modified versions of the default wallet software in order to view some of these transactions, as the software by default is not set up to correctly view a second output in a coinbase transaction.

The first block in the Loki blockchain contains a block reward of 22,500,000 Loki. In order to view these outputs correctly, a patch is required to modify the wallet code to spot these unusual outputs, but can also be seen on the lokiblocks.com block explorer by looking at block #0.

Please understand that when looking at the premine wallet with the view key, it will show a balance ABOVE 22.5 Million. This is because a view key only allows you to see incoming  transactions. Due to the nature of transactions in Loki (inherited from Monero) most outgoing transactions send more than the desired amount, the remaining change is then sent back to the original address. The amount returned is considered an incoming transaction. The view key does not allow you to see outgoing transactions which is why the amount will look larger than it is in reality. When the funds from the premine wallet have been completely used we will post the key images of all outgoing transactions. Combined with the view key this will show the correct balance.
22.5 million is currently 15% of the total supply of Loki, however because of the inflationary tail emission scheme that has been built into the emissions curve, this percentage will diminish over time.

The network was bootstrapped and mined for approximately an hour before the code was released. The first publicly minable block was block 154. All 154 blocks were mined to a wallet controlled by the LAG Foundation Ltd. The reason the software was not immediately released upon the network’s creation was to ensure that the network was stable and that transfers were working between Foundation wallets. Though fairly inconsequential compared to the rest of the premine, the coins mined from these 154 blocks (approx 18,800 Loki) will be put to good use, as determined by the board of the Foundation in accordance with its constitution.

Every Loki block contains two outputs. One goes to the miner who constructs the block, and the other goes to the Governance wallet specified in the code. Other nodes check that this output was sent to the right place as a consensus rule. Auditors can check the Governance block reward wallet with the same patch to see incoming block rewards for 5% of the expected block reward.

For security reasons, we will not specify the exact nature of the wallet/private key management of wallets controlled by the LAG Foundation Ltd, but members of the community should know that many considerations have been made regarding the safe storage and usage of these wallets.

Once more, a reminder that the view key will only allow the user to see incoming transactions into the wallets. Key images can also be provided, but should not be considered as a trustworthy source, as no evidence of the ultimate recipient of coins can be derived from these key images.

We are keeping records of all of our transactions and collecting receipts and invoices for payments that are made and the Foundation will be subjected to an audit from a major accounting firm. The auditor will be granted access to the backend of these wallets and be given evidence to prove the validity of the destination addresses. We are in discussions with a number of highly reputable firms in order to produce a financial statement and report on the status of the Foundation’s wallets at the end of its first financial year. This report will be published on the Loki Foundation website when available.

I hope that this report has given you an idea about what we’ve been up to, and gives you a better sense of what we’re trying to build. If you have any questions, concerns, or suggestions, you can always find us on our Discord, or at [email protected]